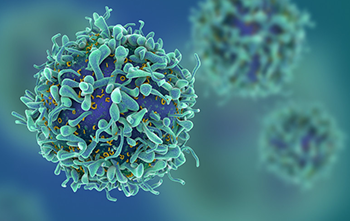 MyD88 is the main adaptor molecule for TLR and IL-1R family members. Here, we demonstrated that T-cell intrinsic MyD88 signaling is required for proliferation, protection from apoptosis and expression of activation/memory genes during infection with the intracellular parasite Trypanosoma cruzi, as evidenced by transcriptome and cytometry analyses in mixed bone-marrow (BM) chimeras. The lack of direct IL-18R signaling in T cells, but not of IL-1R, phenocopied the absence of the MyD88 pathway, indicating that IL-18R is a critical MyD88-upstream pathway involved in the establishment of the Th1 response against an in vivo infection, a presently controvert subject. Accordingly, Il18r1−/− mice display lower levels of Th1 cells and are highly susceptible to infection, but can be rescued from mortality by the adoptive transfer of WT CD4+ T cells. Our findings establish the T-cell intrinsic IL-18R/MyD88 pathway as a crucial element for induction of cognate Th1 responses against an important human pathogen. 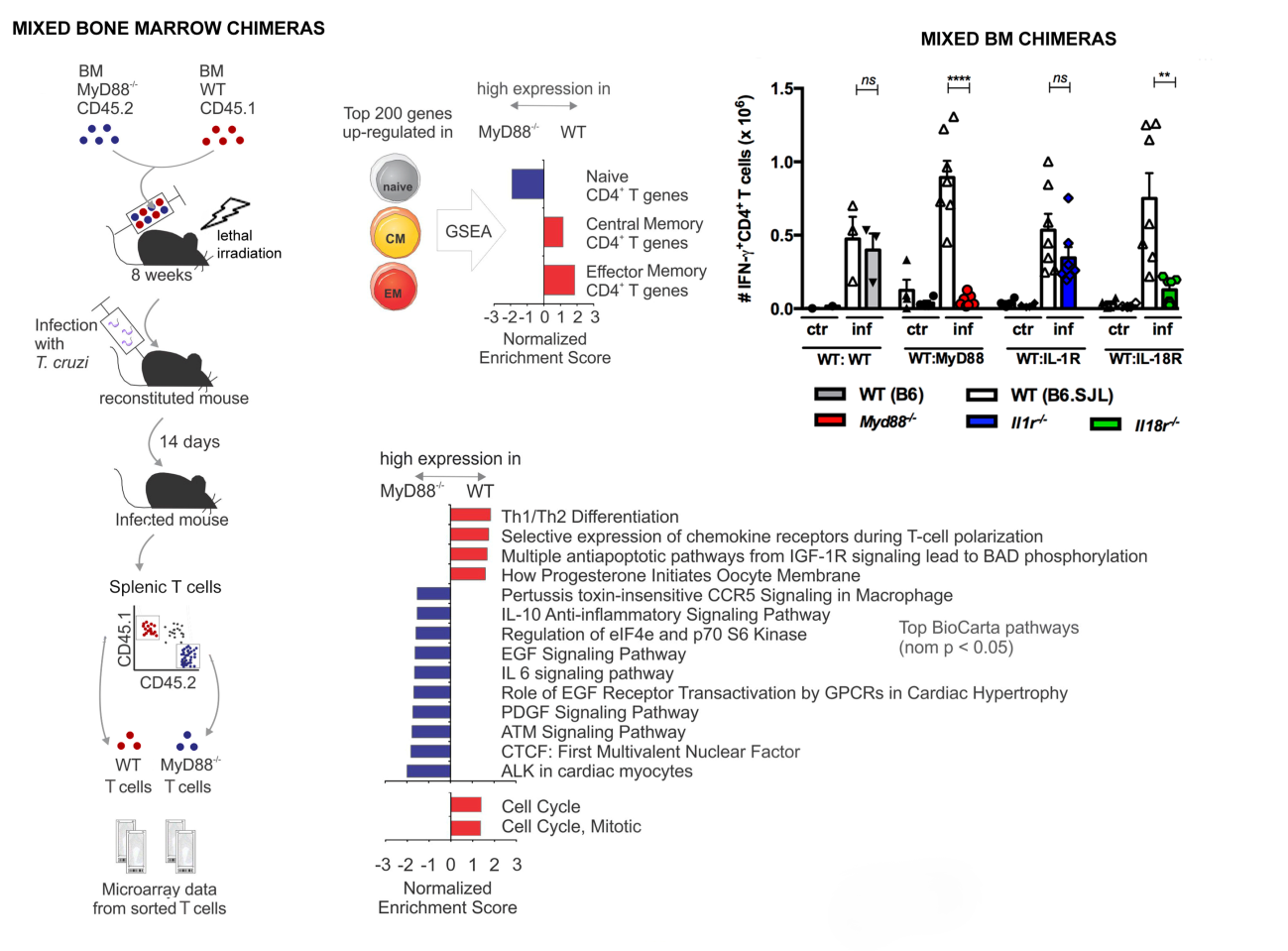 Cytokines of the IL-1 family contribute for the reinforcement and/or stabilization of CD4+ T cell lineage commitment into each of the main Th phenotypes: Th17, Th1 and Th2 (Acosta-Rodriguez et al., 2007; Chung et al., 2009; Guo et al., 2009). While the essential contribution of direct IL-1R signaling for the differentiation of Th17 cells has been documented in the EAE mouse model (Chung et al., 2009), the direct effect of IL-1 or IL-33 on the expansion of Th1 cells remains a more controversial issue (Ben-Sasson et al., 2009; Schenten et al., 2014; Villarreal and Weiner, 2014). IL-18 was initially shown to synergize with IL-12 for IFN-γ production by Th1 cells in vitro (Robinson et al., 1997), but its essential role in promoting Th1 responses to infection was not always confirmed in the context of in vivo infection (Haring and Harty, 2009; Monteforte et al., 2000). Moreover, although in other circumstances Il18−/− mice show a diminished Th1 response (Takeda et al., 1998), this phenotype cannot be uniquely ascribed to the lack of response of T cells to IL-18, as IL-18 also potentiates the secretion of IFN-γ by other cells, like NK cells (Takeda et al., 1998), which could in turn impact on Th1 response. In fact, NK-derived IFN-γ has a profound influence on Th1 responses (Scharton and Scott, 1993). Therefore, the full significance of T-cell intrinsic IL-1R and IL-18R signaling for Th1 responses to infection in vivo is still an important issue that needs further clarification.

To investigate the role of T-cell intrinsic MyD88 signaling on Th1 differentiation in vivo, here we have infected mixed bone marrow (BM) chimeric mice with the intracellular protozoan T. cruzi, the etiologic agent of Chagas’ disease (American trypanosomiasis), a neglected emerging disease, which is endemic in Latin America. Several TLRs are involved in the protection against T. cruzi and Myd88−/− mice are highly susceptible to infection, displaying low levels of IFN-γ+CD4+ T cells (Bafica et al., 2006; Caetano et al., 2011; Campos et al., 2004; Oliveira et al., 2004, 2010; Rodrigues et al., 2012). Although the absence of TLR signaling in APCs of Myd88−/− mice may lead to their deficient activation and may explain a limited Th1 polarization response, these former results do not exclude the possibility that the absence of CD4+ T cell-intrinsic MyD88 signaling through IL-1R family members could also be an important factor for the deficient levels of Th1 cells in Myd88−/− mice. Here, we tested this hypothesis by comparing WT and Myd88-, Il1r1- or Il18r1-deficient T cells in infected mixed BM chimeras. Besides comparing T cell numbers, BrdU incorporation and the expression of IFN-γ, CCR5 and CD44 by flow cytometry, we also analyzed the transcriptional profile of WT and Myd88-deficient CD4+ T cells, sorted from infected mixed BM chimeric mice. Our results revealed, for the first time, the critical role of T cell-intrinsic IL-18R/MyD88 signaling for mounting a robust Th1 cognate response, as a consequence of proliferation, protection from apoptosis and expression of activation/memory genes during infection with an intracellular pathogen. Furthermore, we demonstrated the high susceptibility of Il18r1−/− mice to infection with T. cruzi, which could be rescued by the adoptive transfer of WT CD4+ T cells. In summary, the present study unambiguously demonstrates the crucial role of T cell-intrinsic IL-18R/MyD88 signaling for a robust Th1 cognate response against an important human pathogen and discloses the mechanistic framework underlying it.

Dr. Claudiu Supuran is in Brazil to teach the course on Carbonic Anhydrase on 12 and 14 December. Entries must be made in the Institute's postgraduate field.
Interviewed by IMPG journalist Dr. Claudiu Supuran expressed his opinion on biotechnological development in Brazil and his contribution to scientific research in the field of pharmacology, he also spoke about the greatest challenge for scientific research in the world.

In the Dr. Claudiu’s opinion, when observing the level of scientific publications of Brazilian colleagues and their insertions in reference journals, one can conclude that the biotechnological development in Brazil follows its immense potential.
Supuran identifies Brazil as one of the countries of greatest contribution to scientific research through its biodiversity, referring to the environmental richness found in Amazonas and its diversity of biotypes present in the miscegenation of its people.

For this reason, Brazil presents a myriad of possibilities for scientific research, for studies of diseases and development of drugs.
When asked what would be the greatest challenge for scientific research in Brazil, Dr. Claudiu answered that this challenge was related to the whole world, it is a policy of continuous investments in science, the easing of procedures Bureaucratic in both the acquisition of inputs for research.

Have you ever had: Dengue, Chikungunya or Zika? Epidemiological Survey and Research in Big Data 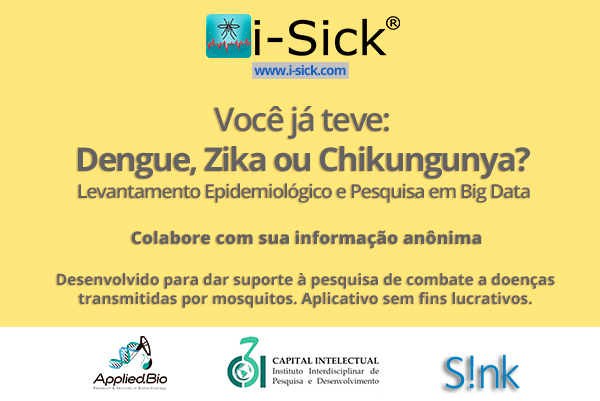 Would you like to contribute to the fight against diseases that afflict us? If you have had Dengue, Zika ou Chikungunya, please visit our web-based app and collabirate with researchers in the most difficult part of this process: availability of patient data. All information is anonymous and confidential. There is no connection with users. There is absolutely no financial soliciting.

I-Sick is a free multi-plataform web-based app with a noble mission: to provide data that will be treated statistically and become important information in the research of diseases transmitted by vector such as mosquitoes. One might argue that data provided by lay people is not reliable. However, large volumes of data can show important patterns resulting in valuable information. The solution to many of the challenges facing humanity will be possible by the emerging science of "Big Data".